Earlier this year I joined the museum sector and have been overwhelmed by how generous and welcoming the community has been.

Many of the people I have met in the industry spoke highly of the Museum Computer Network Conference. So I traveled to New Orleans for the 49th annual event to learn from the best and the brightest in the sector.

It was a lot like drinking from a firehouse during the 3 day event. With so many great sessions, conversations with interesting people, and extracurricular activities. I focused my experience on in-gallery engagement, website redesigns and the future of digital in museums. Along the way I learned new things about ephemeral social media and measuring success.

Two of the most memorable sessions for me showcased innovative ways to engage visitors in the museum.

Dustin Growick from Museum Hacks shared a low tech, high engagement way his company uses technology in museums across America. Instead of an app, real people facilitate tours that use people’s phones to create a series of fun activities that drive participation, user-generated content and brings new audiences in the door.

Set up cheeky photo ops, NOT telling them where to take selfies, get them involved, gives agency, collaboration. Also great promo #MCN2016 pic.twitter.com/oUkxaErc6X

An app for our museum is something I have been thinking long and hard about. It is a big investment with a short shelf life. What struck me is Museum Hacks accomplishes many of the goals of a traditional app without the need to build or buy one.

The SFMOMA and Detour presented another interesting take on mobile in the museum. Detour is a platform for creating guided audio tours with group sync.

The @SFMOMA @Detour app presentation was a real highlight of #MCN2016. Talk about results! pic.twitter.com/L7XMyHFKS9

What makes the SFMOMA’s audio tour’s so special is the creativity they put into making them. Each audio tour is an immersive walk with a storyteller. They range from HBO’s Silicon Valley stars Martin Starr and Kumail Nanjiani try to understand Modern Art to French high-wire artist Philippe Petit exploring unbalanced artists.

These engaging tours and the app’s solve for wayfinding really sold me on the platform and justification for developing an app.

Like many others, we too are in the process of a website redesign. This year at MCN my peers from The Met, MOMA, The Whitney and SFMOMA all shared their experiences.

Their presentations reaffirmed the LEAN and Agile/Scrum/Kanban approach we have taken. As well as, commitment to designing systems to delegate responsibility for updating and editing content to the appropriate departments within the museum.

.@SFMOMA web team looks at storytelling and programs as means to lead to conversion on their site #MCN2016 pic.twitter.com/wfhevaWC3h

It has helpful to hear about their MVPs (minimum viable products) and the role of user testing. And how these contributed to creating visual websites with streamlined navigation and homepages.

The most interesting comment came from James Provenza from SFMOMA who shared that the philosophy of their website is to create a parallel, but distinct experience of the museum, focused on funnelling visitors to key engagement areas.

What’s next for Digital in Museums

One thing on my mind has been the role of digital leaders in the future. As infrastructure is built and digital becomes integrated into everyone’s job, I wonder if digital professionals will engineering themselves out of a job.

This was somewhat confirmed by MIA’s Douglas Hegeley when he stated that there is no “digital strategy” at MIA, there is one strategy. However he quickly followed this up by sharing that instead they have a digital roadmap that aligns with the institution’s strategy.

"There is no "Digital Strategy" at MIA, there is one Strategy" —@dhegley #MCN2016 pic.twitter.com/KJjV0GdLmC

In another session, Chad Weinhard shared his thoughts on the subject saying he does not believe technology will slow down and that there will always be a place for digital leaders to work across silos to execute the museum’s strategy.

And Sofie Andersen from the Whitney Museum of American Art shared that after building the infrastructure it is time to focus efforts on creating great digital experiences for our visitors.

Angie Judge from Dexibit and I presented a workshop on applying LEAN and Six Sigma to projects in the Museum space. In it we taught how to measure success of a project.

Measuring success is something that I am always thinking about. In the session “Making Data About Museums Actionable,” Corey Timpson, Bruce Wyman, and Kate Haley Goldman discussed the process they are going through to create “the one number” for measuring visitor satisfaction.

One of the biggest aha moments for me at the conference was Nik Honeysett’s presentation “The Angle of Curiosity and the Open Jaw of Awe”. I’m not going to spoil it. You can watch it below.

In addition to the sessions, I had many interesting conversations.

In the hotel lounge, I had my questions about ephemeral social media answered by the Social Media Manager’s from the The Broad and SFMOMA. They shared that Snapchat and Instagram Stories have filled the need of this generation to express themselves through social media at a certain moment in time, without having it documented forever. It is honest and authentic.

And Robert Weisberg organized an “blogging unconference” over lunch on the second day. A great group of people joined in on a conversation about blogging, which is what inspired me to write this post.

Can I ask a favour?

If you’re reading this, thank you for your time. Hopefully you enjoyed this post. If so, please sign up for my newsletter. I won’t email you often, actually I haven’t even started my newsletter yet. But in the future, I might send you some things I think you will like. 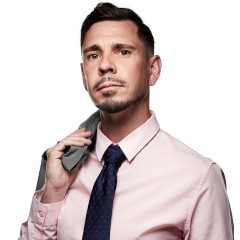 CONNECT WITH ME ON LINKEDIN

Let me share my secrets with you. I promise to never spam you and that any email from me will be worth the read.